A good Network Infrastructure Design in your computer network infrastructure is foundation of your computer system environment you would like to build on it. No matter how good you design your computer system if the Network Infrastructure Design is poor, the system will not run efficiently due to network congestion. If you ever lived in a big city you probably experienced being crowded by a heavy traffic with thousands of vehicles. When you go to the office by a car normally would take you only 10 minutes from your house, but in a heavy traffic which is crowded with thousands of cars, probably it will take you more than one hour to get to the office.


When we are taking about Ethernet in Network Infrastructure Design we need to be familiar with the Ethernet topology. An Ethernet network uses either a physical bus or star topology. The logical topology is a bus which means that all messages are broadcast to all devices on the network through a network cabling. You also need to be familiar with the selection of LAN cable which is used as Ethernet transmission media. 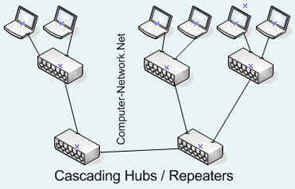 Ethernet in the Network Infrastructure Design depends on the LAN cable type used. The most popular is 10BaseT which operates in 10 Mbps using baseband signaling over twisted pair cable. You can use hubs or repeaters to connect multiple segments in a cascading star topology, however there are limits to the number of segments and repeaters that you can connect in this manner.
Ethernet that use twisted pair cable must adhere to the following Network Infrastructure Design rules:


Ethernet Network can run in two different modes, either half-duplex or full duplex. Half-duplex uses the same physical or logical path for both sending and receiving data, such as simple hubs or repeaters. While the full-duplex Ethernet in Network Infrastructure Design creates separate paths for sending and receiving thus eliminates the collisions. Full-duplex requires dedicated switch ports for each device.


Both Ethernet 10BseT and Fast Ethernet 100BseT use the same Category 5 cable with the maximum length equal to 100 meters. But for Fast Ethernet, you can use only 2 class II repeaters on a 100BaseT network, instead of 4 repeaters for a standard Ethernet in your Network Infrastructure Design.
The other thing to note is that all the components; the NICs, Hubs, and Switches are compatible with Fast Ethernet.

Gigabit Ethernet operates at 1,000 Mbps (1 Gigabit). By using the same Category 5 twisted pair cable as Ethernet and Fast Ethernet, 1000BaseT has the maximum length equal to 100 meters.
You can also use Gigabit Ethernet in your Network Infrastructure Design for your high-speed backbone or for LAN to desktop connections for bandwidth-intensive devices. But by using Gigabits Ethernet only one repeater is allowed between any two devices.


By having segmentation in Network Infrastructure Design we can have the following benefits:


This segmentation in your Network Infrastructure Design is very useful in isolating the traffic to a segment, or to prevent unwanted traffic from crossing over to other segment, or to slow WAN links. For example in your mining department which shares huge geology data between them, in your Network Infrastructure Design you can segment the mining department in separate network segment. This way you don’t need to flood your other department networks with this huge data.

I recommend that in your Network Infrastructure Design you use intelligent switches which support Virtual LANs (VLAN). VLANs allow the network to be easily segmented for management and/or security reasons. They also allow the flexibility for high density LAN’s to be built using the same switched hardware. Multiple switches can also be interconnected by using a VLAN trunking protocol to transparently connect VLANs.

Designing your network, you will need to think about securing your network entry point with the firewall when connecting to the un-trusted network like the Internet. And protecting the corporate network with the best security software would be perfect.

Check out also the article: